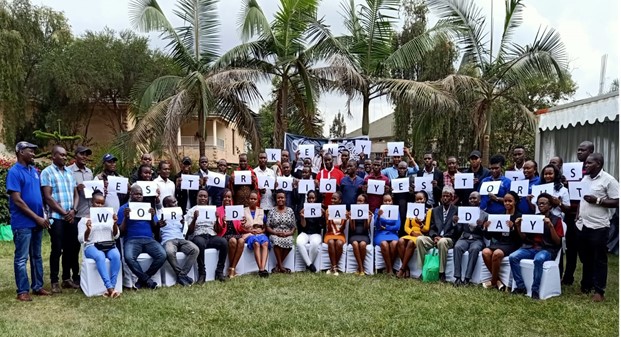 World Radio Day is a universally celebrated event annually, on the 13th of February, that was adopted by UNESCO, in celebration of the immense contribution and role of radio in the community. This year’s theme “Radio and Trust” aims to not only look at how radio can continue being the trusted source of verified information but also how to transform loyal audience engagement into the sustainability of the radio stations. The theme of this year is so significant as the world grapples with misinformation, disinformation, and fake news. In Kenya, we even need to be more vigilant as the electioneering season is here with us. This is the season where instances of incitement to hatred disinformation and propaganda are quite rampant and thus, can seriously erode the trust of radio, destabilize and seriously affect communities.

Kenya Community Media Network (KCOMNET) in partnership with GIZ/CPS celebrated the World Radio Day on Saturday 12th February,2022 at Shalom House, off Ngong road under the banner “Yes to Radio, Yes to Trust”. The event which was graced by representatives of 42 community radio stations as well as different stakeholders in the media industry aimed at reflecting on the theme, ‘Radio and Trust”. Many milestones have been achieved in the Media sector especially for the Community Media and it was indeed a day everyone had a chance to reflect and give feedback and reviews that the sector needs to address for continuity. As the umbrella network for community media in Kenya, KCOMNET’s mandate is to enrich community media through networking, capacity building, content development and policy advocacy for transformative social change in Kenya.

The occasion kicked off with a series of activities that were lined up for the community media representatives and other media stake holders. The event was opened by remarks from  Mr. Tom Mboya, the Coordinator of KCOMNET. In his remarks, Mr. Mboya maintained on the need to remain on course in spite of the challenges faced by the sector and to always conduct any business with integrity and professionalism and strive to relay information that fosters Cohesion and Social integration putting emphasis on the ongoing electioneering period and upcoming elections in August 9th 2022. Since community radio stations remain the first point of reference for community members who are seeking truthful information, thus “Yes to Radio, Yes to Trust”. He also called upon the regulator, the communications Authority of Kenya, to review the current broadcasting regulations service in recognition of the sector. The coordinator expressed is gratitude to GIZ/CPS for their continued support to the community radios through our Umoja Radio for Peace (UR4P) Project and fully supporting the event. After the coordinators Remarks, The moderator of the day Mr. Alex Ikambi  of KCOMNET took participants through the Panel discussion Forum.  The panelist of the day were Grace Githaiga of Kenya ICT Action Network (KICTNET) and board member of KCOMNET, Abraham Marita of Internews and two representatives from community Radio stations; George Mwamodo-Station Manager, Mwanedu FM and  Hilda Ajema -Station Manager, Ghetto FM. 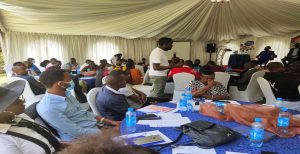 The panel discussion questions focused on the sub theme: Trust, Accessibility and Viability of the Community Radio Stations. The moderator prepared three questions: 1). How can Community Radio stations transform loyal audience engagement into financial sustainability? 2). How can radio be used to build trust and cohesion between communities during and after elections? 3). Practical ways to build trust within communities during and after the electioneering period. Below are some of the view shared around the sub-themes

George Mwamodo-Station Manager, Mwanedu FM -“Radio is a great tool to unite people. The question we should all ask ourselves is how we can synergize energies to come together and create an enabling environment where we can discuss the challenges facing the sector. So many regulations hinder our productivity and holding such meetings gives us a chance to engage, discuss, prepare and present our grievances and recommendations to the relevant bodies. Journalists have to research. We need concrete evidence of the stories that we produce.”

Hilda Ajema -Station Manager, Ghetto FM -“Radio is flexible and accessible. Journalists should uphold trust and integrity as we are the ones on the ground and so close to the community thus, we understand their needs. Giving the community credible information should be our mandate hence this year’s World Radio Day theme of ‘Radio and Trust’ resonates so much with our profession. We have to investigate as we need concrete evidence of the stories we produce.

Grace Githaiga -KICTANET– “Many assessments have been conducted and Radio remains the most powerful accessible tool for news especially among rural communities. In a world where fake news and mis-information is the order of the day, what distinguishes Radio is verified stories. Radio is the second trusted form of media in Kenya. There is confusion on the categorizations of media, especially Community Radios, Vernacular and FM radios as sometimes there is no clear-cut definition of what each does. There is a need by the regulator to ensure that Community Radio is well defined because the work we do is distinct, it is different and the target population is different. Community Radio Stations serve those who haven’t benefited from the formal structure of information. Young voices must take on the battle because we cannot accept to be clumped with stations that spread hate and foster war thus, we must be trustworthy as we do our work. Trust has not been lost but it has been betrayed. In such a year with electioneering, the slant news take is alarming. Information that is objective is no longer the aim. Social media sometimes channels false information and sometimes when radio stations want to remain relevant, they copy that information with verifying the truth. Our focus as Community Radio Stations should be to rebuild trust. The point of Trust betrayal is competition, we focus on advertisements and the number of audiences without realizing that Trust is what distinguishes us from the rest. We have to be keen on divergent views and be accommodative of other people’s opinions as we do our work with utmost professionalism.”

Mohammed, Garbatulla  from Ranet FM  “The founder and license owner of Radio Ranet is the Kenya Meteorological department. They withdrew their support in July 2019. Ever since staff have been volunteering as there has been no income enough to run the station’s operations. However, because the community trusts us, bearing in mind that the population we serve are pastoralists as Garbatulla is an ASAL with extreme climatic conditions. This means that we are very close to our listeners and they have owned the station. The community pushed an NGO to approach the government to push the coverage from 30km to 100km with a total of 10,000 people. An NGO has partnered with us and soon the staff salaries will be catered for. This could not have happened if we were not truthful to our listeners. We are glad that they support the station fully and they own it, they always refer to it as “our station”.

The last session on Media regulations was taken through by KCOMNET’s Coordinator Mr. Mboya.  He stated that the regulations published by Communications Authority of Kenya(CA) last year took many stations by surprise. Challenges faced by Community Radio Stations and journalists towards compliance are immense, thus KCOMNET would like to engage with communications Authority of Kenya to Present the views shared today. A Session that was embraced with active participation from journalists which would later be followed up by a meeting with KCOMNET and radio station managers.

In their concluding remarks, the panelists noted that community radio stations and journalists have to invest time to conduct research and fact check information.  Journalists should seek to practice professionalism, practice diversifying their source for sustainability, Representatives left the venue with the theme of Day deeply engraved in their hearts. Journalists renewed their commitment to abide by the truth and maintain professionalism as they do their work which is relaying truthful information to their listeners even in the forthcoming general elections. Stations have to adhere to the regulations set by governing bodies like CAK and that way the sector will grow. The moderator summarized the session in three conclusions: a widespread call for research and verification of information, recognition that there will be challenges that face the sector therefore need to be professional and adhere to the regulations set and need to conduct our business with truth and integrity that promotes peaceful co existence among communities. 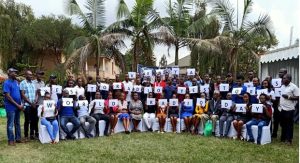